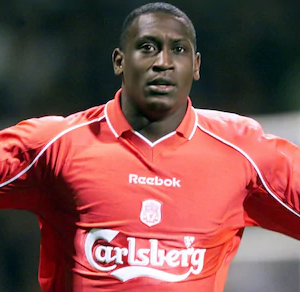 Emile Heskey impressed in Leicester’s youth team, leading the club to hand him his first team debut in 1995. Heskey made 154 league appearances for Leicester, scoring 40 goals, helping them to win two league cups. In 2000 he made an £11 million transfer to Liverpool, breaking Liverpool’s record transfer fee. In his first full season with Liverpool he helped them win the treble, scoring 22 goals in 56 games.

His impressive performances in the league earned him a call up to the England squad, making his debut in 1999. Heskey’s unselfish playstyle helped him to become an important part of the England team, offering England more than just a goal scoring forward. Heskey made 62 appearances for England scoring 7 goals.