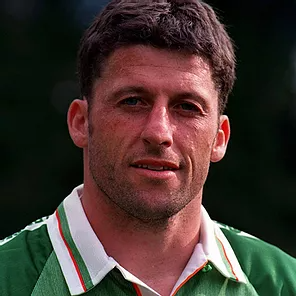 Starting his career at Welling United and then Weymouth, Townsend came to prominence at age 21 when he signed with Southampton. In 1988, he moved on to Norwich City, before joining Chelsea two years later. He made 110 appearances for Chelsea, but the midfielder found won no trophies during his time there. In 1993, he signed with Aston Villa for £2.1 million and enjoyed four successful years winning the 1994 League Cup. He was made captain and lifted the League Cup again in 1996 before his transfer to Middlesbrough in 1997 where he helped them win promotion to the Primer League. His final club was West Bromwich Albion, where he retired in 2000.

Playing for the Republic of Ireland, Townsend was part of the most successful Ireland showing at a world cup, playing all five matches of Italia 90, in Ireland’s run to the quarter finals. He captained the side at the 94 World Cup where Ireland were eliminated by the Netherlands at the knockout stages.