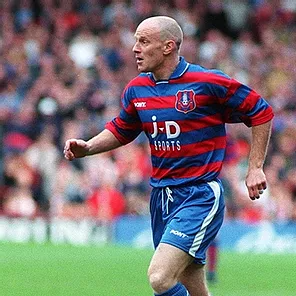 Andy Ritchie started his career in 1977–78 with Manchester United and scored a hat-trick against Leeds United while aged just 18 and another hat-trick against Spurs when 19, before being sold to Brighton & Hove Albion in 1980 where he scored 26 goals across three years at the South coast side. He was later sold to Leeds United, where he made some fine performances, notably in the 1984–85 season when he scored two hat-tricks. He served the Elland Road club until 1987, when he signed for Oldham Athletic, where he would stay for eight years, during one of the most successful periods of the club’s history. On leaving Oldham in 1995, he spent two years in Division Three with Scarborough.

In his senior career, he made 661 appearances (88 as substitute) and scored 210 goals. He played his last game, for Oldham, in the 1998–99 season, by which time he had returned to the Boundary Park club as player-coach.